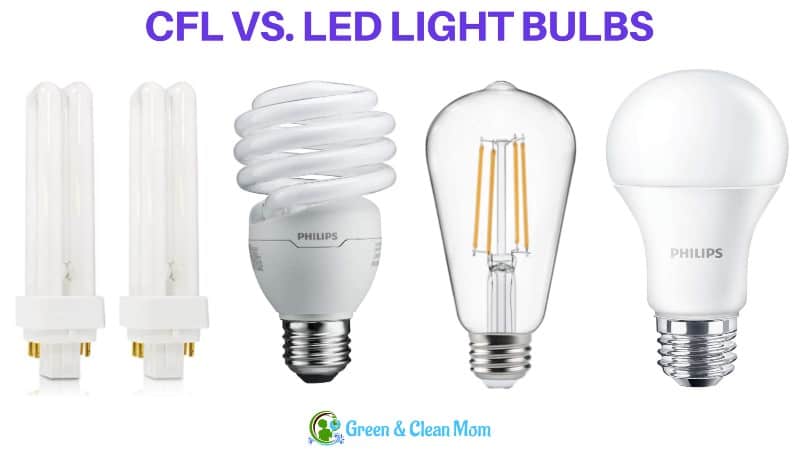 What Are CFL Bulbs? 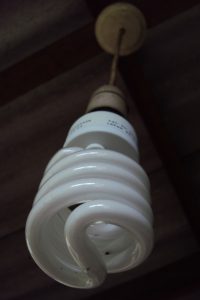 CFL (Compact Fluorescent Light) bulbs are fluorescent energy-saving light bulbs initially designed to replace incandescent bulbs. These bulbs feature tubes that are bent either in a U-shape or a circular shape. They are brighter and last longer than incandescent bulbs, but they’re not quite as energy-efficient as LED bulbs.

How do they work? They are lit by an electric current that contains a tiny amount of mercury gasses (more on that later) and some argon. This creates an invisible UV light inside the tubes, which in turn stimulates the fluorescent coating that is on the inside of the tubes. That then creates the visible light CFLs output. It’s worth noting that this is also the reason why CFL bulbs take some time to “warm-up”. They typically turn on with 50% output, and it can take up to 3-4 minutes for them to heat up to their maximum lumen output.

Lifespan: CFL bulbs have an average lifespan of 10,000 to 15,000 hours, which is at least 10 times longer than incandescent bulbs, but still not as high enough as LED bulbs. But 10,000 hours is still a lot – you could leave the bulb turned on 24/7, and it would still work for more than a year. You’d waste a whole lot of energy if you did that and your electric bill would be pretty high, but I’m just trying to give you an idea of the longevity of CLF bulbs. They don’t need to be replaced often, so they’re perfect for lamps that are hard to reach.

Cost: Just like LED bulbs, CFLs were outrageously expensive when they were first introduced but have become a lot more affordable since. They’re cheaper than LED bulbs, but they’re still somewhat pricier than basic incandescent bulbs. However, the upfront cost is nothing, when you consider just how much money you can save in the long run if you swap out your incandescents for CFLs.

Warm-Up: The warm-up time necessary for the bulb to output maximum brightness remains the biggest con of CFLs. It makes the bulbs useless in spaces where you need a lot of light as soon as you flip the switch, and it can also hurt your eyes somewhat. Also, it’s worth noting that CFLs can’t be dimmed, so they’re not at all compatible with dimmer switches.

Mercury: Mercury is an essential component of CFL bulbs and it’s also a hazardous material. It’s not entirely clear whether the mercury from a broken CFL bulb could seriously damage your health, but in any case, it’s recommended that you don’t touch it with your bare hands and that you try not to breathe in if the bulb is near your nose. Mercury is particularly dangerous for children and pregnant women, so think twice before putting a CFL bulb in your kid’s room.

What Are LED Bulbs? 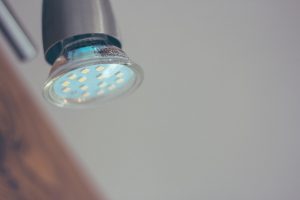 LED (Light-Emitting Diode) bulbs are electric and they produce light with Light-Emitting Diodes. They are much more energy-efficient than incandescent bulbs and they can even be more efficient than CFL bulbs. LED bulbs are pricey to purchase, but they’re the best value for money in the long run since they use much less electricity than any other type of bulb. They are also incredibly bright, with some of the best LED bulbs having an efficiency of 200 lumens per watt.

Lifespan: LED bulbs are known for their longevity. They have an average lifespan of 25,000-30,000 hours, which is 2-3 times longer than CFLs. If you were to leave an LED bulb on 24/7, you’d have to replace any after some four years. It’s worth noting that not every single LED bulb you buy will have a lifespan of 30,000 hours. It’s usually indicated on the box, and it depends on a variety of other factors like the brightness of a bulb, quality, wattage, etc.

Efficiency: LED bulbs are the most efficient type of bulbs out there. They’re 80-90% efficient – the numbers indicate the percentage of electrical energy that is transformed into light. The remaining 10-20% is converted into heat and counted as lost energy. That’s one of the reasons why LED bulbs are cold to touch, and why they remain the most cost-efficient solution in the long run.

Cost: LED bulbs are some of the priciest light bulbs on the market, especially when you start looking into all the unique shapes and sizes. When they were first introduced they cost north of $100 for a bulb and only the richest among us could afford them. Nowadays you can get an LED bulb for less than $1, which is pretty amazing.

LED bulbs have become ubiquitous, and you can get them in any shape, size, or form you want. There are basic bulbs, smart bulbs, RGB bulbs, and countless other types, each unique in its way. Basic LED bulbs are generally the cheapest options, while the special designs tend to cost a little extra.

Light Hues: Switching from an incandescent to an LED bulb is a big change in terms of light quality. LED bulbs are very bright, but they often have a blueish hue that can be harsh on the eyes. They’re most efficient when they emit a blue-white color, but that’s not exactly the most comfortable thing for your eyes and most people prefer LED bulbs with warmer hues. The good news is that the color quality is usually indicated on the box and you can choose what you want to buy. Warmer-toned LED bulbs are easier on the eyes, but they’re not quite as bright or as efficient as the colder-toned ones.

Price: The cost of LED bulbs remains one of the main arguments against them. Most people don’t consider long-term pros and cons when they’re standing in an aisle in front of 50 different light bulbs – they tend to choose the option that looks like the best value for money. That’s hardly ever going to be an LED bulb because the upfront cost is pretty high. However, it’s important to keep in mind that an LED bulb will end up saving you money in the long run because it doesn’t use as much electricity as CFLs or incandescents.

Now that you know enough about CFL and LED bulbs, let’s take a look at some of the best bulbs you can buy!

The Ledadvance Sylvania light bulbs are a good option if you don’t want anything extremely bright. They’re 23W light bulbs with a 6500K color temperature, so they’re very energy-efficient and affordable.

You can get a pack of 24 LED bulbs for less than $1 per bulb – that’s pretty great! They’re not the brightest bulbs out of the bunch though – they’re 8.5W bulbs, which is equivalent to 60W incandescent bulbs. The lumen output of these LED bulbs is 800 and the estimated yearly cost to keep them lit is just over $1 per bulb.

If you prefer warmer light hues, these Philips LED bulbs are an excellent option. They’re dimmable 8.8W (equivalent to 60W incandescent) bulbs with a lumen output of 800. If you prefer cozy environments, these affordable LED bulbs are a great option for you.