When it comes to water bottles and other options, Camelbak has a long history. But lately, there has been some companies catching up and even overtaking them with ideas, technology and cool features on their water bottles.

That is why I wanted to compare Camelbak’s Eddy bottle with all the options you get with Contigo, to see how they stack up.

Are Contigo taking the crown from Camelbak? And will your kids (or even you) be better off with one over the other?

Let’s find out in this detailed comparison…

The Main Differences Between Camelbak & Contigo

Let’s take a quick look at the main differences between their kids water bottles.

Camelback is pretty famous for their bite sipping and straw system that is now seen all over the place, especially on their ever-popular Eddy drink bottles (I have one in front of me right now).

For their kids bottles they have slightly redesigned this and called it Just The Right Bite. It is easier to flip open, and stops kids from pulling it off accidently. It is spill-proof in any position, of course. And, cleaning it is also super-simple. Here is what it looks like: 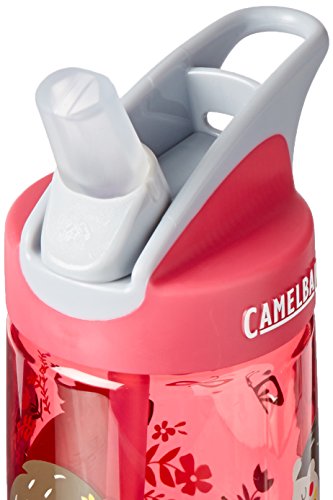 Contigo has quite a few options, including one that looks similar to the Camelbak Eddy. It’s a pop-out spout that is also integrated into the lid. The big difference is that there is a button you can press to make it pop-out. Instead of having to flick it like you do with the Camelbak. Both could be done one-handed, but the Contigo is way easier. 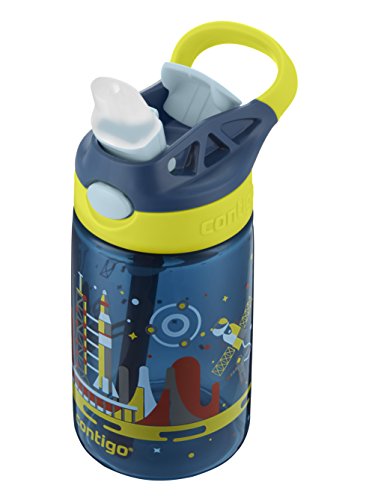 They also have a different system that has their Autoseal system which is always closed/sealed until you press the button. You do this as you go to drink, so it’s super-intuitive. Then when you put it down, or even drop it, it’s closed already. Smart, huh!

The last one from Contigo is their spill-proof straw for kids. Yes, it’s a straw, but still no leaks. You can even tip it upside down! Crazy, right? 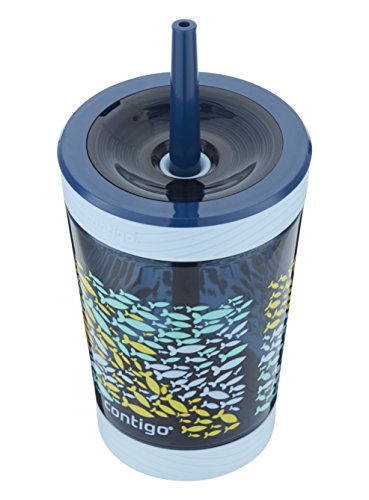 Let’s start with the Camelbak, because it is only one bottle type – the Eddy.

All the parts can be removed and placed in the dishwasher to be washed. No problem. However, the straw and the bit valve do detach from each other, so you could lose them in the dishwasher. It makes it easier to clean thoroughly of course, but just be careful.

The one weakness of these types of bottles in general is that the spout/bite area tends to get dirty and builds up bacteria. I have had to clean mould off mine. So, keep an eye on it. There is also no cover/protection like on the Contigos (more on that below) which is a shame, so the bite area although it does go into a recessed plastic area, is not covered.

The Contigo bottle on the other hand has a cover that auto-magically goes over the sipping portion of the bottle when it’s put back in place. You can see it all snuggly backed away in the image below. The following video also shows how it works:

On top of this, the straw has a handy strap that keeps it attached when you take it all off for cleaning. This is especially great for when you throw it all in the dishwasher (because you can). That does not mean you don’t have to hand wash it on occasion, as the sipping piece can get a bit grubby over time.

This is not the case with the straw bottle version though, so keep that in mind if that is the one you go for.

This is one thing that really annoys me with my Camelbak. The straw just can’t reach the last portion of the water at the bottom, so you end up looking like a fool trying to suck it out. But, it just won’t come out!

Although the Camelbak kids verison has the straw slightly offset from the center, which is a great improvement, the Contigo goes a step further and angles it into the deepest part of the bottle. Perhaps the best solution I have seen yet!

There is not a big difference here, but I still want to mention it.

The Camelbak Eddy bottle for kids is 350ml or 12oz.

Contigo has quite a few different bottles and some are not the same size, but most of theirs are 420ml or 14oz. There are a couple of slightly larger ones that are 470ml or nearly 16oz.

So, these two bottles are a little different, but they still share some of the same great features and benefits.

Knowing how bad BPAs are for our kids, it’s great to see that the manufacturers these days are all NOT using it. Of course, it has gotten a little more complex since the discovery of the BPA problem. Similar chemicals like BPA are also not great for us, so they are also avoiding those.

Both Camelbak and Contigo are using Tritan plastics which DO NOT use any of these chemicals.

Where there is silicone used, like in the sipping area, they also use medical grade materials too.

If you do want to avoid plastic where you can, Contigo also offer a stainless steel version which you might want to check out.

So too does Camelbak, even if they are not as commonly seen or used by most people.

Big thumbs up there !

This was more or less covered above, but I wanted to just mention it again.

Both companies use materials that can be used in the dishwashers, which helps a lot when you have to clean these things regularly! They are also easy to take apart

Both companies have a handy grab area that can also be hooked onto bags. This does not included the straw cup from Contingo of course, which is meant for more around the house. But still, it’s a great way to enable kids to carry and use this cup on the go, while at school, playing outside or just to clip to your bag or a stroller.

Which Is The Perfect Bottle?

Camelbak are perhaps the better known option, and you will have probably seen them around town or at the gym. I certainly have.

However, for me, the options you get with the Contigo along with the attention to detail on the cleaning (and keeping clean) and other areas (like reaching the last portion) are great. They also have the quick release button which is head and shoulders above the Camelbak, which although useable, is harder to do.

Check out all the options via the buttons below and see which one you think your kid is going to love? You can even get adult versions of them too if you fall in love with them yourself!