Dutch overs are a tool I think everyone should have in their kitchen.

First of all, you can cook great big stews for those long winters and either serve them up for a few days, or freeze them for those days you don’t have time to cook. I do this all the time.

However, because dutch ovens are also big, deep pots that heat really well, you can use them for all sorts of things like searing meats, creating soups, whipping up a chilli or just about anything you can imagine. Once you know what the do best.

The challenge always is, if you don’t have one yet, is choosing the best kind of dutch oven for you.

I know which ones I love, but let me explain the big difference between stainless steel and cast iron models. 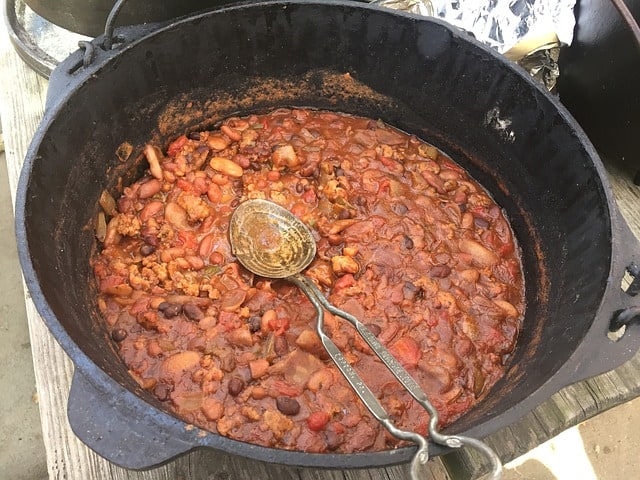 Stainless steel and cast iron are similar in that they are both metals, but for cooking they are quite different.

Cast iron, as your grandmother probably knows, is a great metal for cooking because it holds and distributes heat really well. To a point. It is slow to heat up though, but holds the heat for a longer time. As such, some liken it to driving a boat – it takes time to heat up and cool down, but avoids temperature spikes.

That is why it’s great for things like stews or searing meats. You do need to be careful about very focused heat sources though, which is not usually an issue, but something to be aware of. Cast iron will get hot spots in such situations and burn things.

Stainless steel on the other hand is hopeless at distributing heat (anodised Aluminum is better, but that’s another story). So, manufacturers will usually place a layer of copper in the bottom to carry the hear. However, this will not go to the sides, like it does do more on a cast iron pot. Steel posts are then easier to heat up and cool down, but you have to get the temperature just right for long term cooking, and you could burn things if you turn the temperature up too fast.

Stainless steel and cast iron are quite different in this regard, so let’s take a closer look…

Stainless steel pans tend to stick unless you use a lot of oil and butter all the time, which most of use want to avoid. That is why non-stick pans are so popular, but they tend not to last and eventually need to be replaced.

As far as dutch ovens go though, most stainless steel versions are raw, and do not have non-stick coatings. They are raw, 100% stainless steel. Which means they will last, but also be hard to clean.

Cast iron, on the other hand, should be seasoned, which puts oil constantly on the metal and always keeps the pan from sticking. The oil does not burn or run off constantly like with stainless steel, which is super smooth, and you also get into a habit of maintaining the surface (or should).

If seasoning is not something you want to be bothered with, and I admit I get lazy with that too, then there are other options.

The classic French “La Creuset” dutch ovens, which I love so much I have two, are coated with enamel and always super easy to clean, no matter what you throw at them!

I remember seeing the bottom of mine after a slow cooked stew was finished and thinking “OMG, I am never going to get that clean” only to be shown yet again, how wrong I was. And how amazing these pots are. The only problem is, they are super expensive. So, get one for Christmas like I did! My Mom loves them too, so she was more than happy to get me one.

Here are what my two look like (classic red), and the inside of one, well-used, but still super-smooth and ready for action!

Note: buying the steel oneIf you plan on putting them in the oven, be aware that the plastic knob on the lid is only heat-proof to a certain point. If you plan on cranking your oven up (should not be necessary, but hey, I am letting you know) then consider and just replacing it. My Mom has one, but actually I have no idea how hot she puts her oven. 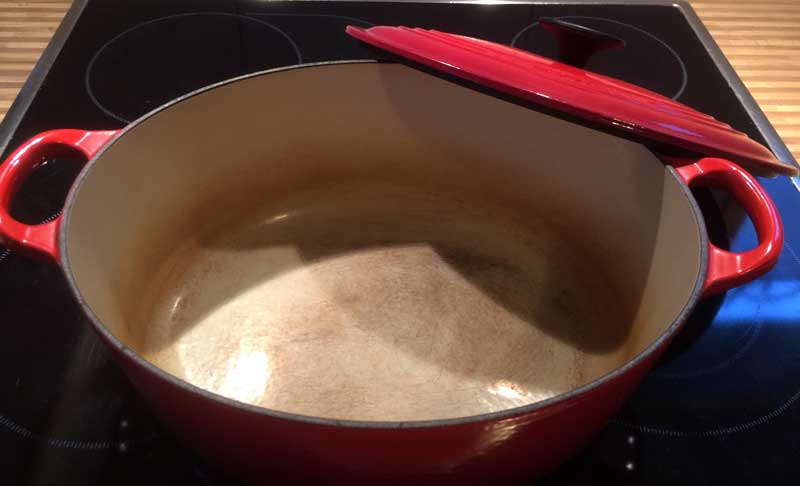 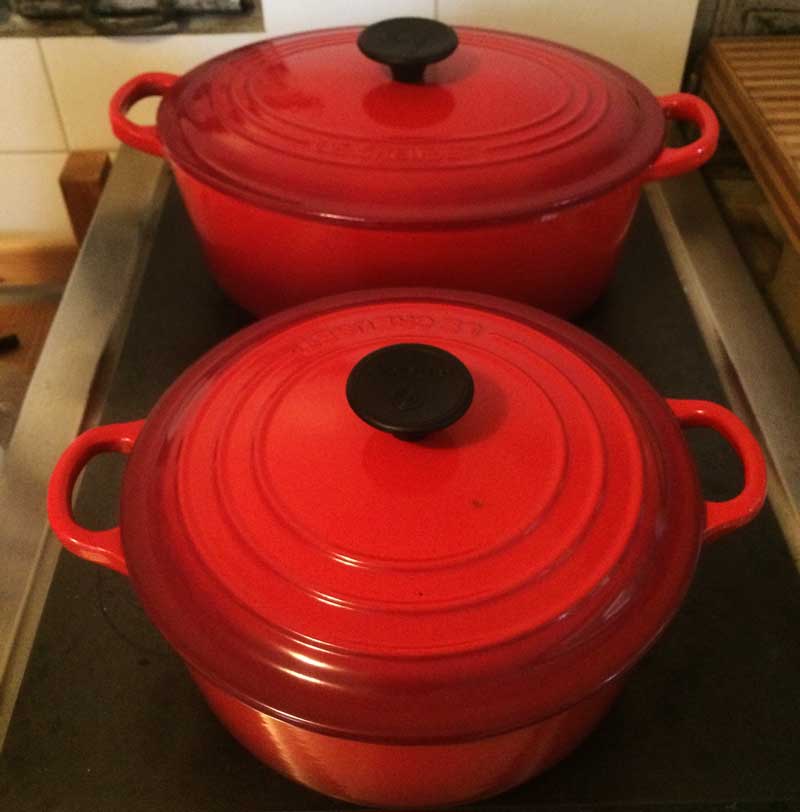 The last thing worth mentioning is the weight difference between the two.

Cast iron tends to be thicker and heavier, so dutch ovens made of that are very very heavy. I often have to use two hands to handle even my small one, when full, because it is such a beast!

This is a downside of course, but it also means that it retains the heat for far longer, which I discussed above. That is the big advantage and reason for owning such a pot in my opinion, so the weight is just a reminder of how great the pots are (and how often do you move them anyway?).

If it was up to me, I would always get a Le Creuset pot, because they are awesome!

But, I know some of you are going to be shocked by the price. So, it’s great to know that there are alternatives like this one from Lodge, which is pure cast iron. It requires some maintenance (which the enamel pots don’t) but you have to make a compromise when paying a fraction of the price of a Le Creuset, right?