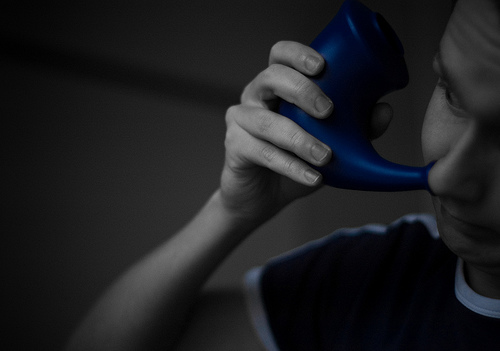 The yogic practice of nasal irrigation using a neti pot can bring swift relief from stuffy noses and sinus pressure.

When I first heard of it, I was pretty skeptical. I mean, pouring salt water through your nose just sounded weird to me.

And then one day I got the father of all head colds. My head was so stuffy that I couldn’t breathe out of my nose, and my sinuses just ached from the pressure. I was desperate for relief.

Sure, I had already tried a humidifier. But I’m a natural guy, and I don’t take over the counter medications at all, but I was ready to that day.

So I went out and bought the neti pot and some sea salt, went home, and dutifully followed the simple instructions that came with it.

After using the neti, I also gargled with warm salt water repeatedly, which helps to clear mucus from the throat and eustachian tubes.

I slept so soundly that night. My head didn’t hurt and I could breathe through my nose.

I was still sick in the morning, but using the neti pot again cleared out all of the mucus from during the night. I continued to use it even after getting well (although not several times a day).

Taking a hot shower and putting your face in the water has a similar effect, but a neti pot is a lot quicker… You don’t have to buy a neti pot, either. You can use a small gravy boat or squeeze bottle (peri bottle) instead. If you do use a squeeze bottle, just let gravity do the work – don’t squeeze it.

It takes some getting used to, but I think it’s helpful for almost any nasal or sinus condition. I use mine regularly, especially if I feel a cold coming on.

Now if I can just convince my daughter, who would rather sniff repeatedly until we freak out than go blow her nose, to use it…