Sippy cup! Sippy cup! Oh, where is my sippy cup!?! Taking all of my daughters “usual” sippy cups away (bad plastic—evil BPA) and replacing them with this sampler pack of cups that I purchased and some great free ones, per request for this review, left her a little confused. It was for her own good though. Seeing that she could not actually tell me about the different cups my four year old son and I filled each of the sippy cups with water and tried all of them. Then we shook them silly to see which ones leaked water (that was the part they enjoyed the most). Over the last few weeks I’ve washed them, watched the kids drink from them and sometimes would offer two and see which one my daughter would grab. I wanted to give the cups a real test!

For each review you will see the cup description and company as well as a picture of the cup. All of these cups can be purchased at varies places, including the companies direct websites but I’m going to recommend, the Green & Clean Mom Store. The reason being, I hope you pick up some other BPA free items along the way! The cups were rated from 1-5 with 1 being okay and 5 being super! Under each of the ratings I have good and bad points that I discovered through the review. The cups were scored based on leaking, how easy she accepted the cup, her preference, cleaning, parts and cost. All of them are considered safe and non-toxic so no need to rate that! Phew!!! Oh, and this is just my opinion and findings, you might have a different experience but here it goes…

Good Points: Sleek and stylish, clean nicely in the dishwasher, easy to drink from, did not leak when we shook it, keeps milk cold for up to six hours and it seemed very easy for her to hold. She gravitated towards this cup many times.
Bad Points: Hard as a rock if it lands on your foot and she dropped it on my toe a few times! Ouch! A few parts to take a part for the dishwasher and if you don’t put them back together correctly it leaks. My bad not the cup!

*Costs a little bit more but it keeps the drinks colder and safer and the price for the straw bottle and the 9oz are the same price at the Soft Landing!

A favorite amongst Moms, this sippy comes in two forms, either with or without holding arms. So, you can choose the version depending on how developed your child is with holding objects. Help them out, or make them feel grown up, you choose! 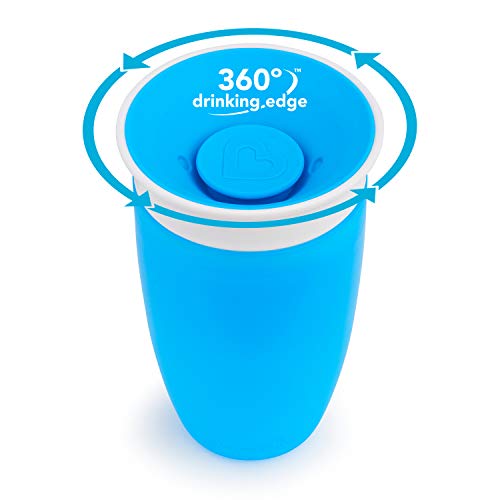 Good Points: Again, sleek and stylish, cleaned very nice in the dishwasher and both my son and my daughter insisted on drinking out this. My son loved how the straw comes up when he pushed the button. He wanted to take it to school. Keeps things cold for up to 12 hours!!!
Bad Points: They both wanted it and I only had one! A few parts for the dishwasher but it was easy to assemble.

Good points: Easy to assemble after putting it through the dishwasher. The handles are a nice bonus but are optional. Probably best for a child new to sippy cups.
Bad points: Leaked when we shook it and she did not prefer to drink out of this cup. It had more of a bottle feel to it. For one cup that didn’t offer anything special I thought the cost of almost $9 was a little high.Test Cup D:

One 9oz Fluid Sippy Cup by Boon with ergonomic grip

Good Points: Unique and easy to assemble! Easy to hold once she got used to it. Came clean easily in the dishwasher and this was her preference every time because she didn’t need to tip it very much. Oh, and it’s very inexpensive ($6) and soft when it lands on your toes.
Bad points: I couldn’t find any that’s why it scored a five!!!Test Cup E:

**
Good Points: This is cup is cheap ($4) and I can find it locally. It was easy to clean and both my son and daughter can use the cup.
Bad Points: It leaked like crazy and she did not seem to prefer it.Test Cup F:

***
Good Points: This cup would not leak no matter how hard I shook the thing!!! There wasn’t any access air when sipping from it and she seemed to like it just fine when it was offered to her. The handles being optional was a nice feature and the lid for on the go. A cup for the child in transition for sure! Easy to find locally and sold in sets.
Bad Points: Way too many parts for me to lose. It drove me nuts taking it a part and putting it together.See my more recent BPA Free Reviews….

The Safe Sippy really has a sleek, slim and nice design. I love it, actually. It’s lightweight and very easy to fit in my small diaper bag. I use it daily, just outside.  If it didn’t leak, I might give it a Green & Clean Mom approval but unless I try the new valve and can tell you it doesn’t leak like crazy, I just can’t recommend you spend your money on this. You’ll be mopping the floor like crazy if you do.  I love the companies mission statement and what they’re doing but it has to not leak for me to say, buy this BPA free cup.