I’m often on the go for work, which means I’m throwing my laptop into my work bag. I never thought out what my laptop bag was made of or worried about it being made of neoprene but maybe I should have done some research.

What Is Neoprene Made Of?

Neoprene is a black stretchy material which is petroleum based, versatile, synthetic rubber. It is produced using the chemical Chloroprene to form a carbon and hydrogen based chain polymer.

It was originally created by DuPont back in 1931 when the price of natural rubber was becoming too expensive. It is now found in lots of things we buy and use every day.

What it is made from and how it is made is what makes neoprene a concern. But it is it’s allergy producing potential that is most concerning.

My friends at EWG named neoprene the allergen of the year back in 2009. Neoprene can even be an allergen for some people, according to an older Press Release from the The American Contact Dermatitis Society (ACDS). On top of this, it contains some chemicals, both in itself, and also for packaging (talc powder) which can also cause problems.

For years surfers have been concerned about neoprene being used to make their wetsuits. Luckily, back in 2016, Patagonia came out with a new, environmentally-friendly solution, revolutionizing the wetsuit.

Other companies, like Seea have followed suit and used environmentallly focused materials from Yulex to make wetsuits that still function the same but are not a lot safer for surfers.

Yulex uses sustainable tree harvesting to get their Latex, as well as a patented procedure to remove proteins that typically cause allergies. So, they have not only replaced Neoprene with something natural, but solved the good ol’ Latex allergy problem too! And on top of that, the farmers that produce the latex (from the Harvea trees) are committed to sustainable forest management through the Rainforest Alliance. So, you know you are doing something good for the world too.

Here are some of their products. Not only Neoprene-free, but they look great too!

Now, surfer’s use Neoprene and have done for years, but it’s also starting to appear in our lives in places like Laptop sleeves. Because it’s super-flexible, durable and easy to manufacture, that is no surprise to me.

That is why I was on the lookout for a Laptop sleeve that is also neoprene-free, and I’m glad to be more aware and have new laptop sleeve which is a greener alternative! The people at GreenSmart worked long and hard to find a safer, healthier alternative for people and the environment and the result is called Neogreen! 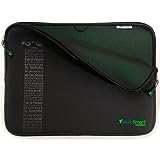 If neoprene worries you or perhaps you’re concerned about the impact neoprene has on the environment, this is a great alternative. It’s good to just be more aware and when possible choose alternatives that are safer for the environment and everyone.

This article was originally published in 2009 and has been updated.

5 thoughts on “Safer Alternatives to Neoprene (For Everyone)”